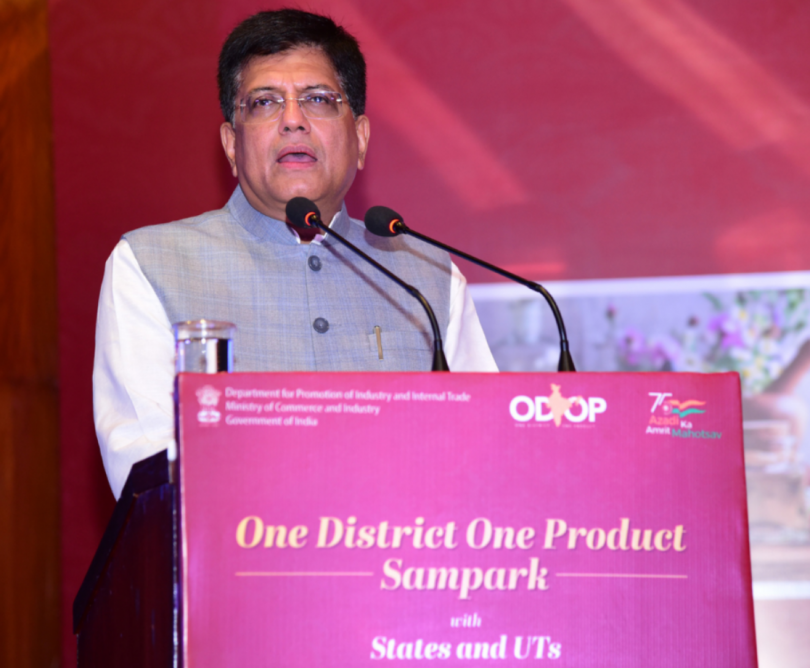 One District One Product (ODOP) will expand its boundaries by connecting customers and sellers on a democratic platform with the help of the Open Network for Digital Commerce (ONDC), according to union minister for textiles Piyush Goyal.

In New Delhi, Goyal recently revealed the unabridged ODOP Gift Catalogue, which features more than 300 products, as well as the ODOP Storefront on GeM (Government e-Marketplace).

With 75 categories covering products from several states and UTs, the ODOP marketplace on GeM went live. According to a press release from India’s ministry of commerce and industry, the storefront’s objective is to facilitate direct procurement of ODOP products for gifting/office use by various line ministries, governmental organisations, and foreign missions abroad.

Goyal said that the convergence, or “samanvay,” is a crucial element that would push the success of ODOP in reference to the success that ODOP has seen in various states, such as Uttar Pradesh. He suggested that the government’s major initiatives, such as Startup India, Make in India, districts serving as export hubs, etc., be aligned with the goal of ODOP.

Goyal stated that the next G20 conference in India is a fantastic opportunity to highlight ODOP goods. He advised that well-curated exhibitions of high-quality ODOP products and visits to artisan villages be used to introduce ODOP products to the G20 delegates.

The minister also urged students from esteemed colleges and universities like NIFT, NID, and IIFT to come up with innovative ways to promote ODOP. The necessity to brand ODOP products, the majority of which are natural and eco-friendly, as sustainable and good for the environment was another topic covered by the minister. In this connection, he also asked for the process of GI tagging to be streamlined, simplified, and accelerated in order to increase the number of products that are tagged.

To make ODOP a genuine game changer, Goyal proposed five action agendas. He suggested that the ODOP catalogue be expanded to serve as a one-stop shop for businesses, state governments, and nonprofit organisations looking to give gifts.

He continued by saying that the catalogue must act as a top-notch database of top-notch vendors. He urged states to implement search engine optimization and get ODOP items catalogued in a way that facilitates access and selection.

Goyal further said that workshops should be held to assist weavers and other craftsmen with GeM onboarding and cataloguing. He suggested utilising common service centres and post offices to provide this training. The minister demanded increased international participation and stated that ODOP must be present at international exhibitions, events, meetings, and conferences. He requested that Indian embassies see to it that ODOP products get attention abroad.