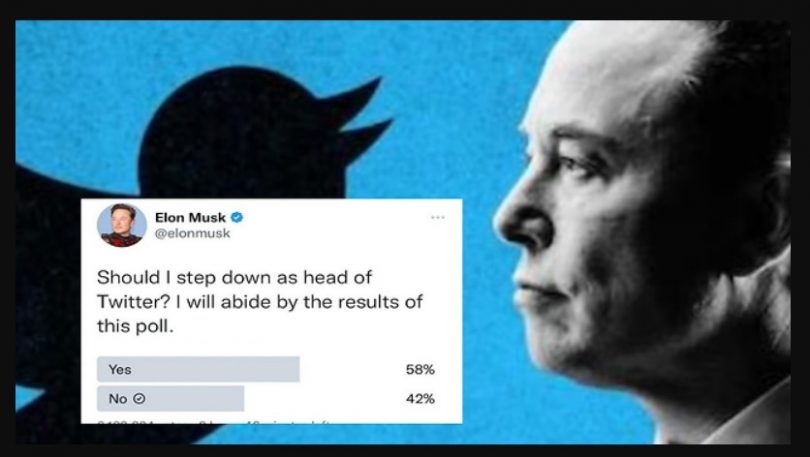 Elon Musk creates a Twitter poll to determine whether or not he should resign as CEO
On Sunday, Twitter CEO Musk posted a poll on the social media site, asking users if they thought he should stand down as CEO. Musk also promised to follow the poll’s results.
The poll is set to end on Monday at 11:20 GMT, but the billionaire omitted to say exactly when he would resign if the results of the survey indicated that he should.
Later, responding to a user on Twitter about a potential CEO replacement, Musk stated: “There is no successor.”
@WallStreetSilv No one wants the job who can actually keep Twitter alive. There is no successor.
— Elon Musk, 1671408283000 (@elonmusk)
Last month, Musk declared to a Delaware court that he would work less at Twitter and eventually appoint a new CEO.
The survey was conducted following Twitter’s Sunday policy change, which forbade the creation of accounts purely for the purpose of promoting competing social media companies as well as the posting of content that contains links to or usernames for such sites.
Musk tweeted, “Going ahead, there will be a vote for big policy changes,” after apologising just before the poll. According to a message from Twitter support, the policy change would affect content from social networking sites like Facebook and Instagram from Meta Platforms as well as Mastodon, Truth Social, Tribel, Nostr, and Post while enabling cross-content publishing.

Jack Dorsey, a former CEO of Twitter who recently made a capital investment in the social media platform Nostr, simply asked “Why” in response to the Twitter support post. Dorsey said, “doesn’t make sense,” in response to another user who posted about the ban on Nostr promotions.
The list did not include China’s ByteDance Ltd.’s short-form video platform TikTok.
Twitter’s Trust and Safety Council, a volunteer body established in 2016 to provide the social media platform with recommendations on site decisions, was abolished last week.

The tumultuous acts at Twitter since Elon Musk, who is also the CEO of Tesla, purchased the social network have led to the change in policy. While debating how much to charge for Twitter Blue, the company’s subscription service, he sacked the company’s top executives and let almost half of its employees go.
Several journalists’ accounts were also suspended by Musk due to the controversy over the publication of the billionaire’s plane’s public data.
Musk restored the accounts on Friday in response to concerns from authorities, advocacy groups, and media organisations from around the world, some of which said that the microblogging site was endangering press freedom.