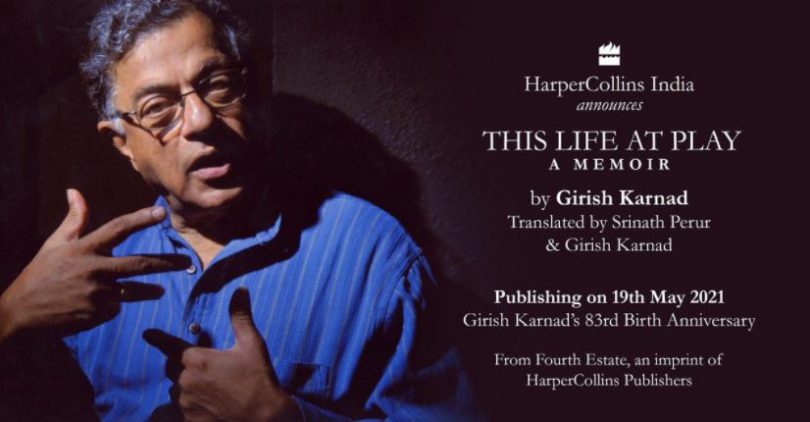 Published on Girish Karnad’s 83rd birth anniversary, 19th May 2021from Fourth Estate, an imprint of HarperCollins Publishers, “This Life At Play”, is a pure form of contemplative work, that speak about some sentiment moments. The work is the English translation of his memoirs in Kannada, Aadaadta Aayushya (which translates as ‘life moves on while playing’).

Looking back in the book, Karnad places that feverishly written, but far from inchoate, early manuscript — in which a son diligently exchanges his youth with his father’s old age — both in the contrary context of his own imminent severing-of-the-umbilical-cord as it were, on the eve of his setting sail for a stint at Oxford as a Rhodes scholar (and the cultural alienation that foretold), and in the unexpected (and at the time, disorienting) ‘sprouting’ of an innate and deep linkage with puranic texts that have so heavily informed his body of work as a playwright par excellence.

It opens powerfully with Karnad’s account of the unusual circumstances under which his mother Krishnabai, a child widow, came to be remarried to his father, Dr Raghunath Karnad, a government doctor, under the progressive aegis of the Arya Samaj — whose figureheads became an indelible part of prayer rooms in successive Karnad households.

The book’s narrative gaze is not so much retrospective as it appears to be forward-looking, which allows for the gradual unfolding of life’s infirmities, and early blinkers giving way to a healthy cynicism. Although, by the same token, the sheer lyricism of an electricity-free childhood spent in uncannily illuminated darkened evenings, also gives way to character sketches of mentors and cohorts that seem somehow less than inspired.