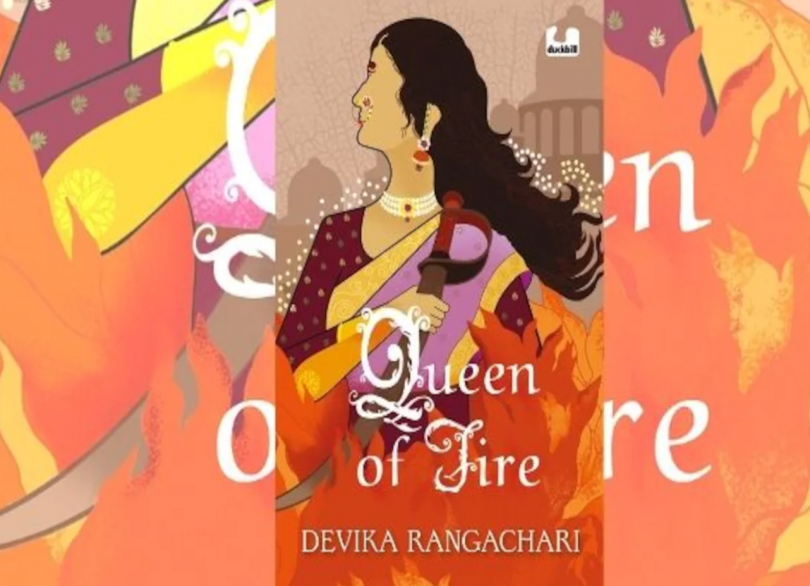 Devika Rangachari’s latest novel, Queen of Fire, tells the story of the brave queen and warrior Rani Lakshmibai of Jhansi, whose cry of revolt against the British Raj mobilized thousands of Indian soldiers to become a part of the National Uprising of 1857. The focal point of this book is her journey as queen, statesman and soldier.
Rangachari draws a detailed portrait of how the newly-widowed Rani Lakshmibai took the reigns of an unsteady kingdom into her own hands, deftly dealt with the British ambassadors sent to her court to oversee the affairs of state, and in the end, joined forces with a large band of revolutionaries, leading a rebellion against the East India Company.
The excerpt follows: Major Ellis was unexpectedly recalled to England soon after the annexation. Some whispered that it was because his sympathy for the rani was well known.
Captain Alexander Skene, the new political superintendent, did not have the ease and familiarity with Jhansi that Major Ellis had acquired over the years. He did not trust its people. Moreover, the times were such that it was not possible for a British officer to trust any Indian. Skene had reports of enough discontented rumblings to know that the people were angry. He believed they were frustrated enough to lash out at the British if provoked, something they would never have dared to do before.
Since the queen and her few remaining Indian troops had been relocated to the palace, he decided that the safest course would be to move all the British officers within the city, along with their families, from the cantonment area into the fort, which lay to the south. And the sooner the transfer was effected, in his view, the better, for the hostility of the citizens of Jhansi was tangible and hung in the air like a black cloud.
On a sultry day at the very end of May, a long line of Englishwomen and their children began to labour uphill towards the fort. Some of them struggled with their boxes and bags. The more fortunate had carriages and servants at their disposal to help with the move.
The atmosphere was tense. But for a long time, the locals just watched in silence.
Some of the disbanded soldiers joined the crowd, and the atmosphere grew more electric.
All of a sudden, one of them jostled a servant who was bent double under the weight of his packages. The bags promptly tumbled off the man’s shoulders and on to the dusty ground.
Shrieks of alarm rang out on all sides. The line momentarily paused.
‘Pick up the bags!’ The Englishwoman whose possessions had fallen gestured furiously at the servant and repeated her order shrilly. ‘Pick them up at once, you clumsy fool!’
Another soldier stepped forward and kicked the bags out of the way, and their contents spilled out on to the road.
‘Why do you still work for them?’ he snarled at the hapless servant. ‘You are not a beast of burden meant to carry their things.’
A hush descended immediately. Even the British children who could not follow the exchange could sense the tension and stood still, watchful and afraid.
The servant, his face twisted in confusion, stood quietly. The Englishwoman’s shouts subsided into a whimpered protest. The two groups continued to wait, each watching to see what the other would do next. Faint cries rang out from those nearest the fort, who were wondering what was holding up the line.
Captain Skene, who was by the fort entrance, barked orders to his subordinates. They were to sort out the issue immediately. There was no time to waste. The light in the sky was already waning. Soon it would be too dark to navigate the long trek to the fort.
Looking down at the path, Skene’s officers could see that the British families had halted. They seemed afraid to move further. The people of Jhansi were drawing close in a circle that seemed increasingly hostile.
The very air seemed to be holding its breath.
The sound of hooves suddenly punctured the silence and all eyes turned in that direction.
Out of the enveloping dark, a familiar figure rode into view. It was the queen with her group of women companions.
The crowd parted to let them through.
The queen’s sharp eyes took in the situation at a glance. ‘What is the meaning of this confusion?’ she demanded. ‘Why have these people stopped? Let the women and children proceed at once.’
The tension defused so suddenly that it was almost as if there had been no crisis at all.
The circle of citizens broke up and withdrew. There were sighs of relief; the carriages moved forward and the British families who were walking were allowed to resume their journey. The children began to chatter once more and the wheels of the carriages creaked as they rolled on.
Happy to have her in their midst again, the very citizens who had been hostile earlier were looking adoringly at Rani Lakshmibai as they departed. She was their queen and their ruler — and nothing the British said or did could change this simple fact.